What’s The Real Story Behind the Worm in the Tequila Bottle?

Why is it there, and what happens when you EAT THE WORM?

Jackson was a world traveler and considered herself open to any adventure. But, tonight, she was put on the spot. For an extra $5, her tequila shot would include “the Worm.” “El Maguey.”

She had heard that the worm was psychedelic, but she was highly skeptical. The real problem was that… it was a worm. Can she get up the gumption to eat a worm? Her friends were sure she could. “Jackson, Jackson, Jackson,” they chanted as she looked at the red Chinicuil worm. Following in the tradition of so many college kids before her, she took the shot and swallowed the worm in one gulp. ¡HUZZAH! 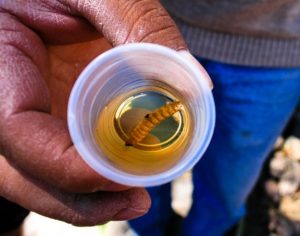 are actually caterpillars. They are the larvae of the Comadia redtenbacheri moth in the family Cossidae. The larvae are found in the same Agave plants used to make Tequila and Mezcal.

Although “The Worm” is commonly thought of being in Tequila here in the states, it’s traditionally found in Mezcal.

And, that tradition is not a tradition at all. It’s more of a gimmick than a tradition. In fact, Mezcal, with the worm in it, is considered a sign of poor quality mezcal. A quality Mezcal needs no gimmicks. The same is true of Tequila.

So… How Did the Worm Get into the Bottle? And Why is it There?

It seems no one knows. There are many stories on who first began marketing Tequila with the worm in it. One thing they all have in common is that it was purely a marketing ploy.

One story is that the marketing angle was first envisioned and put to use by an employee of the company Nacional Vinicola named Jacobo Lozano Páez. Other stories claim that it was originally by accident, and when mezcal and tequila producers saw the reaction created, they realized that it could be of value in marketing.
No doubt, it was good marketing since we all know about “the worm.”

Today, in Mexico, it is illegal to add the worm to a commercial bottle of Tequila.

EAT THE WORM!
What Can You Expect When You Eat The Worm?

A few well-deserved pats on the back are normal, but you may not realize that you just experienced much more.

First, let’s get these myths out of the way. The worm does not give you hallucinations, and it is not an aphrodisiac. The credit here goes to the amount of Tequila or Mezcal a person consumes. 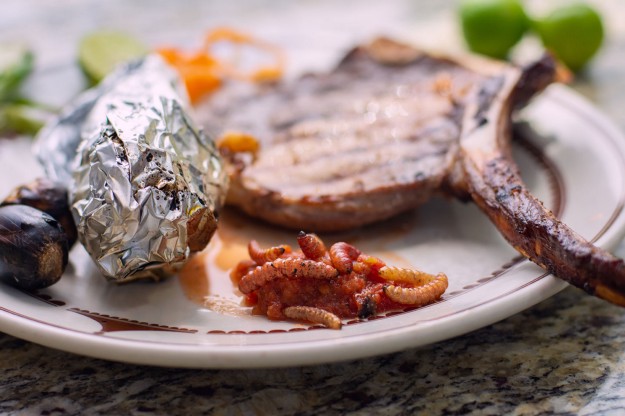 Oddly enough, there are many kinds of gusano de maguey (Agave Worms), but only the Chinicuil Gusano is used. This is the “red worm.” It is highly prized and a more expensive worm.

Chinicuil worms are more than gimmicks added to liquor. They’re nutritious and considered a delicacy. They’re included on menus in many fine restaurants. Chapulines (spiced grasshoppers) are another insect food that Gringos often mistake for spiced peanuts. There are nearly 200 different insects Mexicans consider food, and every one tastes different. People worldwide consider insects as food.

So, when you eat the worm, you are partaking in tradition. The Pre-Hispanic tradition of eating insects. Entomophagy. Something we should all be adopting since eating insects is not only nutritious, but they can be raised humanely in an environmentally friendly manner. Adding insects to our diets makes sense. It’s an unwarranted cultural fear that’s keeping us from this entire food group.

A Word on Sal de Gusano 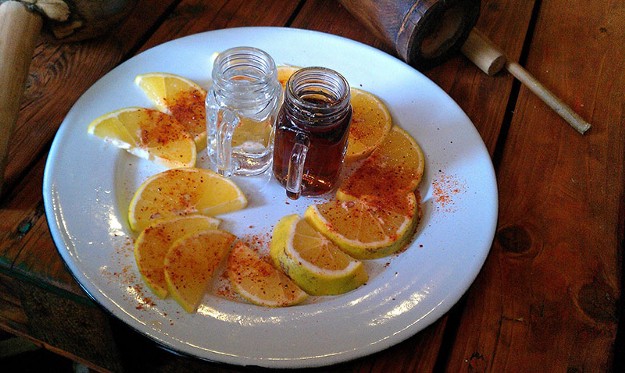 Sal de Gusano, or “Worm Salt,” is a traditional Pre-Hispanic salt. It uses the same Agave Worms in both the white and red varieties. Sal de Gusano is traditional and pre-dates tequila production.

Sal de Gusano has an earthy and smokey taste that many people cherish. It’s an easy way to make a basic meal taste exotic.

Worm salt is used in cooking and as a garnish. It’s commonly sprinkled on an orange slice and served with Mezcal.

Sal de Gusano Marron can be made using any variety of the Maguey Worm.

btw — What’s the Difference Between Tequila and Mezcal? 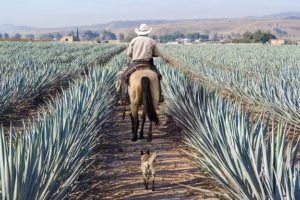 Tequila is almost 10x more popular in the U.S. than Mezcal but that is changing as consumers become educated on the nuances of Mezcal.

Mezcal is a distilled alcohol made from a variety of Agave plants. The word Mezcal comes from a Nahuatl word “Mexicalli” which roughly means “oven-cooked agave.” The type of agave plant, the kind of oven, and the barrels it’s aged in effect the final taste.

Tequila is a variety of Mezcal. It’s made from a specific type of Agave. The Blue Agave. By law, it can only be produced in the state of Jalisco and a few other minor areas.

Tequila has been commercialized and is now mass-produced in large diffusers rather than ovens.